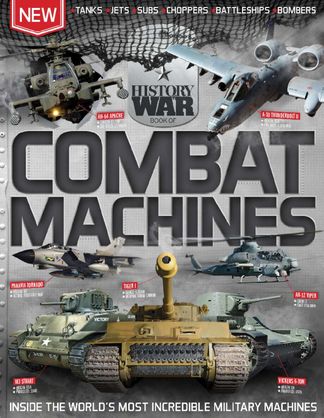 Inside the world's most incredible military machines

In the History of War Book of Combat Machines we chart the history and development of dozens of awesome military vehicles, from the fearsome German Tiger tanks of the Second World War, to the rise of the nuclear-powered submarine, to the hi-tech fighter jets that now rule the skies across the globe. We'll show all the facts and figures you need to become a combat machine expert, as well as breaking down each vehicle to give you an inside look at the technology that makes these tanks, choppers and battleships tick. Featuring:
20 Greatest Machines of War - From the AK-47 to the Apache gunship, the military weapons and vehicles of the last century have transformed warfare on land, sea and air
Land - Follow the evolution of the tank, from World War One to the futuristic vehicles of tomorrow
Sea - Step on board some of history's most famous battleships, submarines and aircraft carriers
Air - From attack choppers to stealth bombers, see in inside a selection of the world's most iconic aircraft

Be the first person to tell us what you think about History of War Book of Combat Machines and you'll save $5 on your next purchase!