All About History Book of War Volume 1 digital subscription 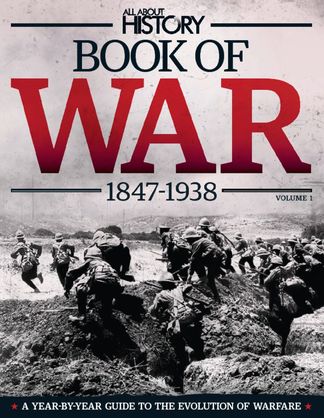 Learn about the battles, campaigns and conflicts that shaped the face of warfare

In this first volume of The Book of War, we take an in-depth look at some of the battles and crusades that shaped the world between 1847-1938. From the Crimean War and the American Civil War through to the First World War and Spanish Civil War, see how the art of war developed and evolved. Structured to give you newspaper-style recordings of the key events year-by-year, read the unbiased reports and discover more about the individuals who played a major role in influencing the outcome of battles. Packed with incredible illustrations and images, The Book of War is a comprehensive guide to the changing face of conflict.
Featuring:
Engaging presentation
- Written in the style of newspaper reports, to give you all the key facts
Every major battle covered
- From the conquest of Mexico City in 1847, to the Spanish Civil War
The main players
- Obituaries of the men and women who shaped the war
Amazing images
- Stunning photographs and illustrations, depicting the brutality of war

Be the first person to tell us what you think about All About History Book of War Volume 1 and you'll save $5 on your next purchase!

https://www.isubscribe.co.nz/all-about-history-book-of-war-volume-1-digital-subscription.cfm 14358 All About History Book of War Volume 1 https://www.isubscribe.co.nz/images/covers/nz/541/14358/square/AllAboutHistoryBookofWarVolume19169509.jpg 13.60 NZD InStock /Digital/Arts & Culture/History Learn about the battles, campaigns and conflicts that shaped the face of warfare 13.60